Angular vs React vs Vue: Pros, Cons and When to Use 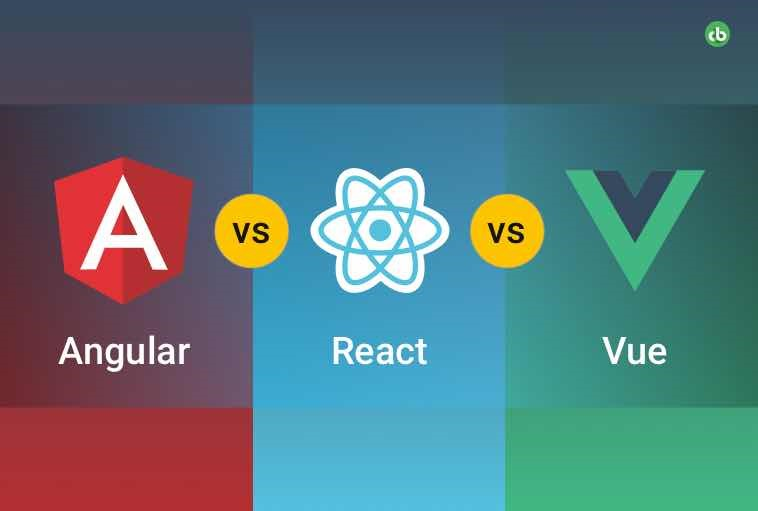 Today, front-end frameworks are gaining popularity amongst startups, businesses, and enterprises since they allow them to build complex apps in reduced development time. With the growing time, these technologies continue to evolve and have revolutionized the way of web development.

Today, we will talk about the three most popular front-end technologies: Angular, React, and Vue. We will break down each framework in-depth to help you identify the best ones as per your business needs.

1. A brief history of Angular vs React vs Vue

So, before we get into the technical details, let’s talk about the history behind these frameworks and how they started and evolved.

Developed by Google, Angular is one of the oldest Type-script-based JavaScript frameworks which was first released in 2010. Then a substantial shift occurred in 2016 on the release of Angular 2 where the suffix “JS” dropped from the original name – AngularJS. Now, Angular 2+ is known as just Angular. Though AngularJS still gets updates, we will still keep our focus on Angular. The latest stable version in Angular is Angular 11 which was released in Nov’2020.

Developed by Facebook, React was initially released in 2013. Having multiple products like WhatsApp, Facebook, and Instagram, it used React extensively to enhance its products. The current stable version of React is 17.X which was released in Oct’2020 having smaller incremental updates till now.

Renowned as Vue.js, it is one of the youngest members developed by Evan You – An ex-Google employee in 2014. In the past three years, Vue has seen a significant shift in its popularity despite the fact it lacks huge community support. The current stable version is 3.0 which is released in September 2020 since then is seeing a lot of popularity. Though the contributors of Vue are supported by Patreon, it should be noted that Vue 3 has its own GitHub repo and has moved towards TypeScript.

So, before you decide to make use of any open-source framework, make sure you’re thorough with its licensing details. It’s amazing to know that all these 3 frameworks use MIT license which restricts reuse of the framework even in the proprietary software. So, make sure to know the implications of the license before using any framework or software.

Since “Angular” and “React” are the most common words, it’s quite hard to gauge their popularity among the developers from Google Trends. However, its popularity and implementation in software among the developers can be identified by the number of stars, ratings, and reviews GitHub repositories get. Talking about the popularity, a sudden shift has been noticed in the stars of Vue in mid-2016 and recently, Vue has been there with React as the most popular framework.

As per the trends of 2018, the number of jobs that require Angular or React Skill sets is approximately the same however, Vue was merely a tiny number (around 20%).

If you’re still looking for some up-to-date analysis, The Google Trends search will break down the search trend over the past 12 months for Angular jobs, React Jobs, and Vue jobs. This data will surely help you to hire front-end developer accordingly. The data embedded is as below:

So, if you’re looking for the current job market perspective, you can surely go with Angular or React. Though Vue has gained popularity over the past three years, it will still take some time to get implemented in the project.

Now that you’re familiar with the history and recent trends of this framework, let’s watch out how the community access the development of these frameworks.

While comparing Vue with React, Vue wins the game as it has a huge number of stars, watchers, and forks. This shows Vue’s popularity and its value among its users as compared to React. However, if we talk about the contributor, Vue bags in lower contributors as compared to Angular and React.

One of the major reasons can be that Vue is driven by the open-source community while Angular and React have significant shares of Facebook and Google. As per the statistics, all three frameworks shows significant development activity and are going to continue in the future.

When it comes to migration, Angular plans every major update in 6 months. So, when it comes to Angular vs React, Facebook stated that stability of the framework is highly important for them since companies like Twitter, Airbnb makes use of React. As compared to Angular, updates in React are comparatively easy and quick.

Talking about Vue3 docs, it is quite similar between 1.x to 2 since 90% of the API is the same. There is a Vue2 to Vue1 migration helper tool that helps you to access your app status on the console.

When it comes to performance, Vue is an exceptionally fast tool. At an incredibly small 18KB after gzipping, this technology will probably have a long life ahead of it.

Let’s have a look at the brands that have adopted these frameworks at their front-end. You’ll surely be amazed to see the names in each group:

How to choose the right JavaScript framework for your project?

So, Which Framework Is the Winner Here- Angular, React, Or Vue?

Well, there’s no absolute answer to this question. Each of these frameworks has its benefits and drawbacks. Based on your project requirements and its features, you can gauge the technology stack capable enough to deliver quality software solutions.

If you’re looking to hire front-end developer to analyze your requirements and choose a framework from the stack that suits your end business goals, Dark Bears is your address. Hire a dedicated front-end development team from us and get your solution developed at an affordable cost.