Angular vs. React: Which is Most suitable for Your Web Application? 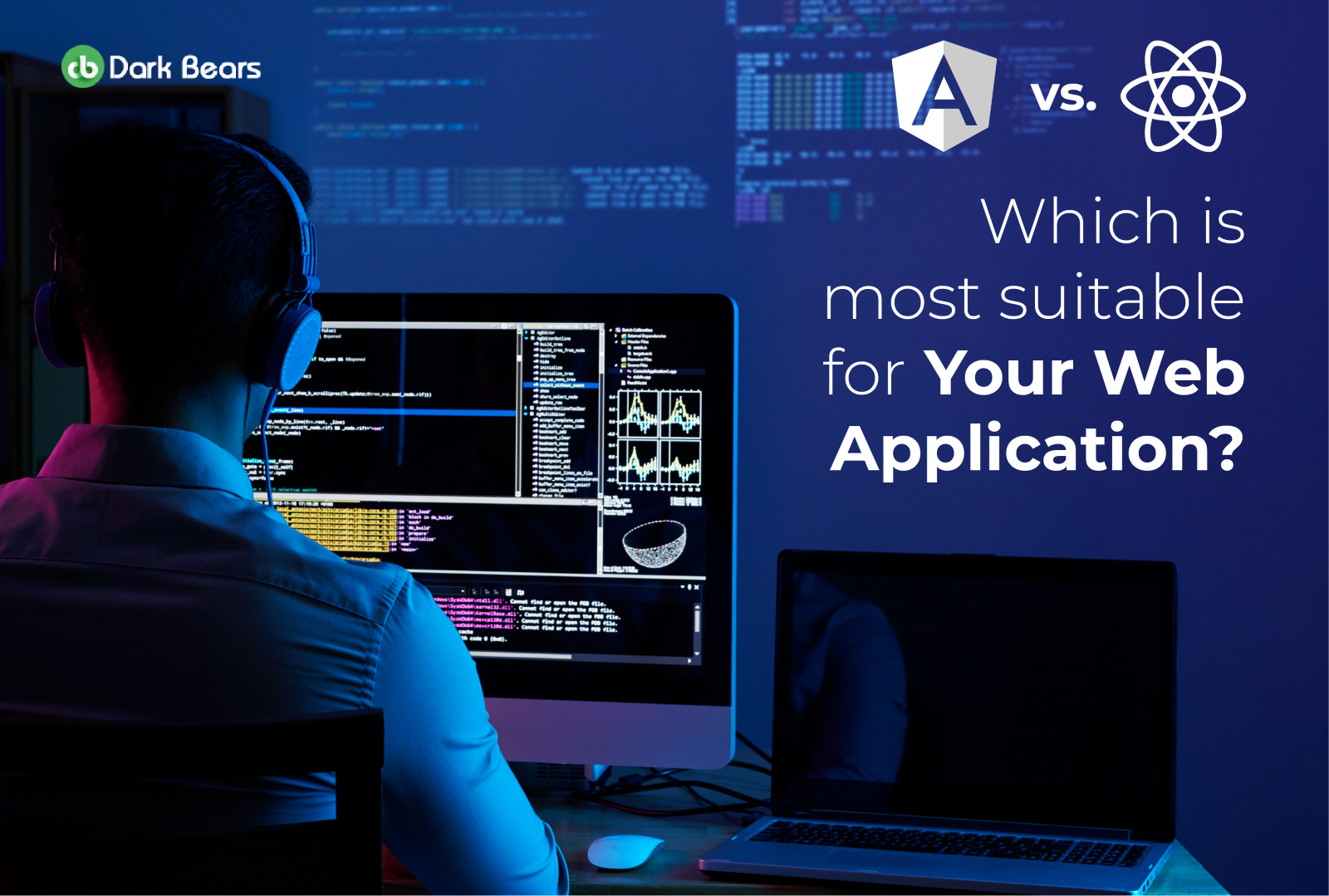 Though JavaScript is one of the most famous and preferred languages for front-end application development, developers face a dilemma when choosing the proper framework or library for their app development projects.

Angular and React are two names that pop up when we think of the JavaScript ecosystem. Both are highly popular, and developers love them as well. Both front-end development frameworks offer some unmatched advantages to developers, and at the same time, both frameworks have their limitations.

However, the million-dollar question is: which one to choose for your project?

Should you hire Angular.JS app development services, or should you go for React developers? What are the main differences between these two frameworks? What should be the criteria for choosing Angular and React frameworks? It is like selecting the candidate for voting when both of them are honest, dedicated, and hardworking.

We have covered almost all aspects of both frameworks to help you make the best decision for your project. Keep reading and get your answer in just a few minutes!

Angular or Angular.JS is a decade-old web development framework powered by Google and built on typescript. Being a component-based web application framework with highly integrated libraries and features, Angular.JS has carved a niche for itself by offering highly scalable, feature-rich, and highly functional web apps.

Some of the most notable features of Android.JS are client-server communication, routing, two-way data binding, dependency injection, etc.

Another significant point to mention is that Google and constantly updated technology back it. Google just released the Angular 12 update with the latest features and functionalities. Also, Angular.JS has the support of its large community base. In case of any issues or concerns, developers can turn for community support instantly.

In short, Angular.JS is one of the leading players to remember for web application development.

What are the benefits of Angular.JS?

Thankfully, developers have no role to play when it comes to data binding.

Angular.JS allows super faster and more accessible data binding, also referred to as two-way data binding. As soon as you make any changes to the view, it will immediately reflect the model and vice-versa.

The server CPUs performance is excellent as Angular.JS supports caching and other processes, which results in reduced traffic.

Furthermore, features such as dependency injections make it possible to allow various app components to be isolated and tested. Angular.JS allows unit testing and end-to-end testing, which makes testing and debugging more streamlined and straightforward.

With directives, front-end developers can make the scripts and HTMP pages organized and uncluttered. With this benefit, they can also make independent codes and use them repetitively.

With Angular.JS, you can expect rapid development. Even freshers can learn the Angular.JS framework easily and quickly to make highly functional web applications.

What are the limitations of Angular.JS?

React is another open-source JavaScript library that is mainly used for front-end web application development. Developers can easily create interactive and challenging user interfaces with React, a component-based framework for developing UI components.

React functions on a simple concept- Learn Once Write Anywhere. It helps developers to create highly scalable web applications in just no time. It is managed by Facebook and has a large community to help developers when they face any issues.

Facebook developed it in 2013, and since its inception, it has allowed developers to create seamless, highly impressive, and dynamic user interfaces. Hire a React.JS app development services provider for your project.

What are the benefits of React?

Easy to learn and use

React is available with lots of documentation, tutorials, and training materials to help developers understand it from scratch. If your developer has a little bit of idea about JavaScript, he will learn to React in no time.

React.JS app development allows developers to reuse the HTML code of each component of the application. It also makes your app development easy and quick. You can create complex applications with the help of simple building blocks made by these components.

The DOM here is virtual, which improves the app’s performance by dealing with HTML, XML, and XHTML. The real DOM, when updated, is used to slow down the performance. React brought the concept of virtual DOM, which eliminated the performance issue.

React has several handy tools on its sleeve which make developers comfortable. You can inspect the component hierarchies in the virtual DOM with these Chrome and Firefox dev extensions.

Generally, search engines find it difficult to read JavaScript-heavy applications. However, with React-powered web applications, you will not see this issue as these applications can run on the server and the virtual DOM makes it possible for the page to render and return to the browser.

React offers a rich JavaScript library that provides developers superior flexibility and versatility to choose what they want.

What are the limitations of React?

A comprehensive comparison of Angular and React

So, should you hire React.JS or Angular.JS app development services? Let’s compare Angular and React for some specific aspects to give a clear idea about their differences.

React developers create their UI tools for UI components, some of which are free and some paid.

However, when it comes to Angular, it has an in-built Material tech stack with advanced-developed components, which makes UI configuration quick, seamless, and easy.

The Angular.JS framework depends on three layers- Controller, View, and Model. The Angular.JS structure allows front-end developers to break the app code into different files. It further will enable developers to use element templates repetitively in other parts of the application.

On the other hand, while developing an app on React, developers can build element trees, making React codes more logical and easy to read than Angular code. Developers don’t have to write code mainly.

Angular and React use code editing tools such as Visual Studio, Sublime Text, and others. What differentiates both are tools such as Create React App (to bootstrap a new React Project),

Next.JS (for React developers to do server-side rendering),

and Angular CLI (to create a new project in Angular framework), Angular Universal (for server-side rendering for Angular).

The main highlighting thing about Angular is that you can test an Angular.JS application using a single tool such as Jasmine, Protractor, or Karma. Here, Angular wins over React.

Angular.JS uses an ionic framework for mobile app development with a UI component library and a Cordova container. The developed app will look like a website in the web application container if you see it on a device.

On the other hand, React.JS mobile apps offer a superior native UI experience to users. Developers can make elements and bind them with the help of the code written in Kotlin, Java, and Objective-C. React wins here.

Angular offers superior productivity and quicker development speed due to the CLI that empowers developers to use one-line commands to create elements and services. It also has an in-built procedure for addressing issues.

When it comes to React.JS, third-party libraries impact productivity and speed. In addition to that, the React toolkit also varies from project to project. It means developers have to put more effort and time into updating the app. Angular.JS wins here.

The Stack Overflow Developer Survey 2020 suggests that React is more popular compared to Angular. However, both React and Angular are widespread and growing technologies worldwide.

React.JS developers have more freedom and flexibility to choose the architecture, libraries, and tools for web application development. You can create a highly tailored application with React.

You can use one tool such as Karma or Protractor to test the entire Angular application.

It is not possible with React.JS. Here, you will need multiple tools to perform different types of testing. It will require more time and effort.

Developers acknowledge it as one of the most crucial factors in selecting the framework for web app development.

Here, Angular and React both are winners as both are effective and offer excellent data overview.

While React uses Fiber and Virtual DOM for app development, the new Angular update features ShadowAPI, which offers brilliant app functionality and user experience. Hence, both are winners in this case.

Angular wins the race as it has a big learning curve with multiple options to address a specific issue. Furthermore, Angular.JS has a complicated component handling system that asks developers to be familiar with different concepts and programming languages such as pipes, RxJS, Typescript, dependency injection, etc.

On the other hand, you don’t need much expertise when it comes to React app development. You can quickly learn and develop an app in the React framework if you are good with JavaScript.

When to choose Angular?

When to Choose to React?

When you need to develop shareable elements in your app with several events, you should use React when you want a tailored app. Also, when your team is good at JavaScript, CSS, and HTML, you can go for React.JS app development services.

Both, Angular and React are good and have their abilities and issues. Here, developers have an extra task to choose the best suitable framework for your app development project. They need to list down some key highlights of the project and determine which framework can help build an app that serves the core purposes. Also, you can choose a React app development company that also offers Angular.JS app development services. It might help you to keep unwanted issues away during the development phase.