Does Blockchain have a Role in IoT? 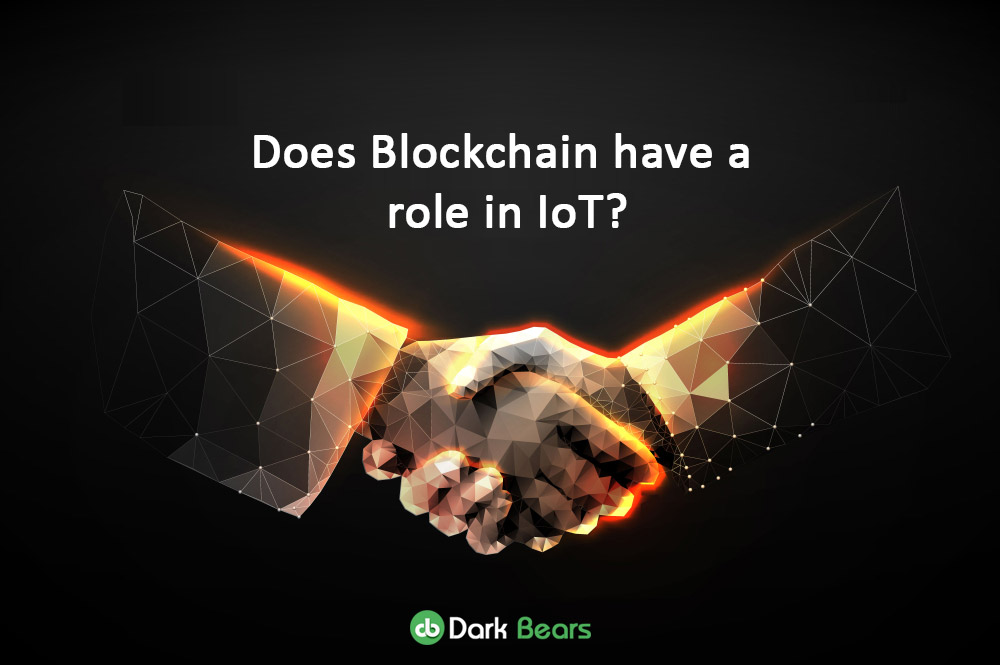 A prominent application of the Internet of Things now extends to the Supply Chain and Logistics sector. Envision a scenario where the consumer with goods in transit connect the vehicle (carrying the goods) and the warehouse (for real-time tracking of packages) through IoT. Consider however those vulnerabilities in the IoT solution allow hackers to cripple the fleet’s vehicle management system, incapacitating the real-time tracking capability of these goods in transit and even putting the good at risk of damage or pilferage. You will agree that this is not an unimaginable scenario. Clearly, vulnerabilities in IoT are foreseeable; and they can fuel intrusion. Anticipating these threats and instituting all possible measures in all the channels employing the Internet of Things is obviously important – but it is undeniably a daunting task.

Forbes predicts the global IoT market in 2020 to swell to $8.9 Trillion. This massive spending is due to the rising enterprise expectations for Return on Investment from IoT. Enterprises plowing money into this technology are trying to regain undermined privacy, secure investments, and the right to safer transactions. Interference in business processes, such as what we outlined in the logistics sector, has motivated Enterprises to learn how to evolve technology to make their operations more robust and secure. And, this is where Blockchain could play a significant role.

How can Blockchain work in IoT?

Some estimates suggest that by 2020, over 20% of all IoT installations will leverage Blockchain services. Greater safety and security are almost certain to be the most common use-cases. IoT devices participating in shared transactions will have the capability to transfer data to private ledgers. Furthermore, the concept of decentralized IoT relies on secure and agile data sharing on a network of a large number of devices. The distributed and decentralized attributes of Blockchain ensure there are no retroactive record alterations. The ledger works only after:

1. Mass collaboration authentication
2. All the subsequent blocks have met the alterations

The convergence of these two technologies is extremely promising. However, enterprises will still need to address the major challenges associating with operational practicalities that could arise in business and compliance affairs. Complex scenarios may arise -for eg. consider a device enabled by a Blockchain application to perform a specific action. The question may arise, who owns the action and takes responsibility for it and the outcome?

Benefits of Blockchain in IoT

According to Gartner, December 2017 witnessed a 31% rise in connected devices which is expected to proliferate further to 20 Billion in 2020. Using Blockchain offerings for these devices could add phenomenal value to the integration process –

1. A Blockchain ledger can assist in identifying, authenticating, and securing the transfer of data in IoT devices.

2. Data exchange between interconnected devices can be faster and without any third party involvement.

3. Multiple devices can rely on distributed Blockchain. Data duplication will ensure that the failure of one device will have no repercussions for the enterprise.

4. Peer-to-peer communication can eliminate the need to create or procure access to specific hardware and conventional protocols.

5. With Blockchain, tracking the contamination of sensor data is much easier and malicious substitution of this data becomes much harder to accomplish.

7. Blockchain has a prominent role in business method simplification, encouraging transparency of transactions, and reducing the unpredictability of interconnected things.

A variety of industries have already invested significantly in IoT and are seriously considering how Blockchain can empower their IoT solutions. These industries are putting their dollars to work to strengthen their business processes and enhance customer experience. Here are some interesting examples:

1. Pharma – To eliminate counterfeiting of medicinal drugs (as much as 30% in some developing countries), researchers are keen to employ the Blockchain-IoT design. All the legal drugs could have an identifier and location stamp filled in the Blockchain ledger informing the authority about its manufacturing and authenticity, resulting in better tracking and eliminating the counterfeit merchandise.

2. Security of Communication – Various governmental organizations, law firms, and media agencies require vital information on critical incidences such as natural and man-made catastrophes to safeguard the public interest. Blockchain technology efficiently encodes and records digital communication in the distributed ledger guaranteeing the authenticity of the data.

3. Livestock and Food Safety – Tracking the supply chain of meat from Paddock to plate is an essential part of monitoring food safety. Blockchain technology is especially useful in tracking livestock during the process of shipment and validating that the shipped animals are the ones ordered. Photographing animals at the paddock and updating them in the distributed ledger (that can never be corrupted) tracks the entire journey systematically.

4. Supply Chain Management – Back to the Logistics sector -Blockchain in Supply Chain Management assures customers a seamless, authenticated, and safe transport from manufacture to delivery. With decentralized technology as its cornerstone, recording and verifying documents at every stage is feasible by entering the details into the distributed ledger.

Want to know more about Blockchain Benefits and its Challenges, here you can read – https://darkbears.com/blog/want-know-blockchain-benefits-challanges/

Who will use Blockchain in IoT?

IoT extends many benefits to numerous industry verticals. The convergence of Blockchain and IoT amps up these applications makes them more secure and escalates their effectiveness. From smart shopfloors and edge-devices to heavy-duty vehicles and electronics, the Blockchain-IoT combination could work for everything and, indeed, everywhere. If the aim is enhanced security, integrity, and privacy of information, then this coming together of technologies could well be the powerful answer.