Top 5 Technologies for Developing Successful Mobile App for Any Business 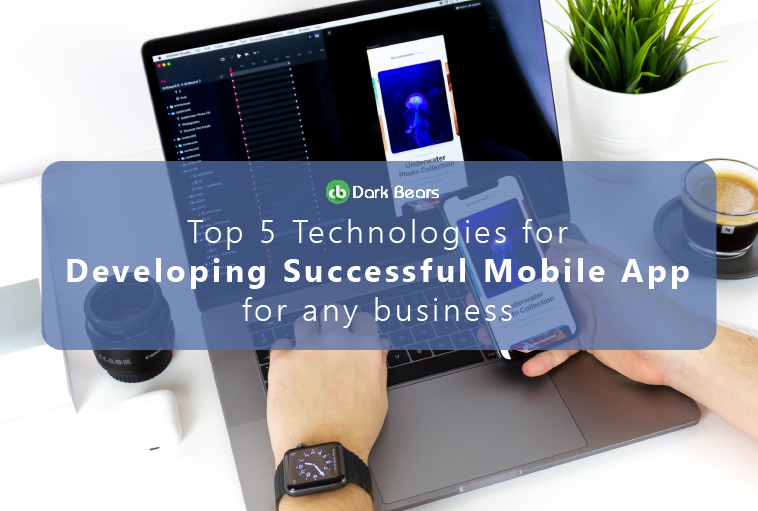 Can you think about a life without a smartphone in today’s age?

Another revolutionary thing that happened in the 21st century is mobile applications. Whether you want to chat with your loved ones or shop online or want to play games, there is an app for you.

Smartphones have become an integral part of our lives so that people are completely engrossed in them throughout the day.

Everything is in your palms now. You can access news, watch your favorite shows, buy things, pay, and maintain a calendar online with the help of these robust, feature-rich mobile applications.

The pandemic hit us hard in the last year, and the world now understands the increasing importance of mobile app development technology that can offer some striking features and functionalities.

Even smartphone manufacturing companies are now upgrading their technologies to support mobile app features such as 5G, Artificial Reality, Visual Reality tech, and many more.

If you want to build a mobile app for your business, you must first learn about available mobile app development technologies to ensure that you choose the right one.

Here is a list of the top 5 mobile app development technologies that have carved a niche for themselves by performing exceedingly well.

Ask any mobile app development company, and they will tell why they love React Native.

It is one of the most developer-friendly, user-friendly, open-source mobile app development frameworks powered by Facebook. Mostly, React Native is used to creating hybrid applications using JavaScript.

React Native offers some fantastic features and rightly grabbing the attention of businesses and app developers to develop highly secure, robust, and feature-rich cross-platform mobile applications. Some of the React Native-powered apps are Facebook, Instagram, Uber Eats, Airbnb, and Skype.

React Native needs to create code once, and developers can reuse it for another platform. It is the key reason behind the popularity of React Native.

You can reduce the cost by almost 50% when you choose React Native app development services.

The main reason why businesses prefer cross-platform application development is because it is a seamless process and reduces the cost to a great extent.

When it comes to Xamarin, it is the most famous cross-platform mobile app development technology. Xamarin was the first framework that allowed developers to develop cross-platform applications. It is now part of Microsoft Visual Studio.

Here, C# is the primary language when it comes to writing codes. Furthermore, it has a wide range of interactive codes to develop feature-rich applications. It is available as a free SDK within Microsoft Visual Studio Code Editor.

Ionic has been a trusted name for years to develop high-quality native and web applications. It is an open-source HTML5 SDK framework that has helped create more than 5 million mobile applications.

It allows developers to make high-quality mobile applications using web technologies such as HTML, CSS, JavaScript, and other tools.

Ionic mainly focuses on the look and app’s UI interaction. You can have platform-specific UI elements with the help of the native components library. Ionic apps are known for their customizable themes and components. It is an npm module and uses AngularJS for app development, as AngularJS makes development and testing easier.

Also, if you don’t find the app satisfactory, you can integrate it with different tools. Also, it can be tested with the browser and has strong developer community support as well. In case you have any troubles while developing the app, you can reach out to industry experts.

Developers love Ionic as it is the best framework to build highly operational applications with a single code base. Pacifica, Sworekit, JustWatch, and McDonald’s are some apps developed with the Ionic app development framework.

Swift is a robust programming language for macOS, iOS, WatchOS, OS X, and tvOS. In recent years, Swift has replaced traditional Objective-C completely. One of the reasons why developers love Swift as it is very expressive and defines the intent clearly.

Swift does not ask the developers to import separate libraries to support the app’s features and functionalities.

It is a statistically typed programming language developed by the Jetbrains community. The main objective of developing Kotlin was to combine object-oriented and functional programming features. It is the advanced version of Java and can be interoperable with Java codes.

If you hire a mobile app development company offering Kotlin app services, ensure that they have completed its projects with Kotlin in the past. With Kotlin, you can get the similar behavior, appearance, and performance of the native UI.