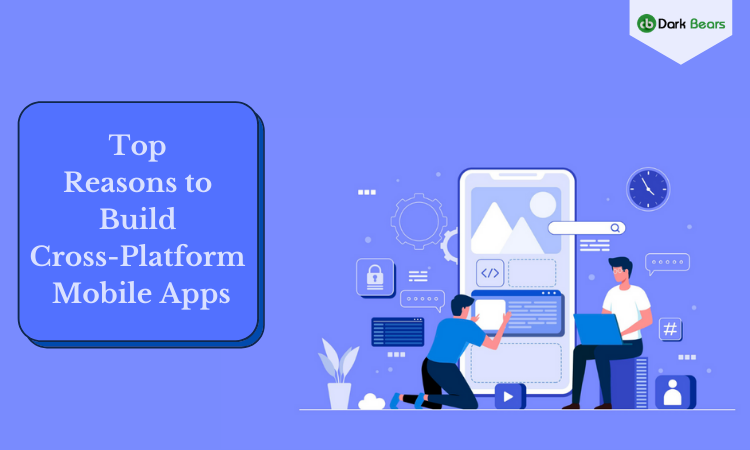 While walking down the street the other day, a friend shouted, oh wait! I forgot my phone. You can’t go anywhere without Uber and google maps, man! This sounds familiar, right?

Interestingly, smartphone owners spend over 80% of their phone time on mobile applications. This exposes how apps (social media/ utility/ messenger) control our lives.

Again, recently the same friend decided to try a new hyped app called Clubhouse (also marketed as an alternative to Facebook). He searched the play store but couldn’t find it. Why? Because he owns a Samsung Galaxy, and the clubhouse app was not yet on the play store. Clubhouse just lost one of its potential, disheartened with Facebook customers.

What is cross–platform mobile app development?

Let’s look at the top reasons why you should use Flutter:

One language. One team. One code to test and maintain. Multiple platforms. Not just this, Flutter also provides UI elements respective to the platform for which the app is built. The crux of the matter is that the overall cost of developing an app trickles down drastically since the same team needs to maintain a single code base for various platforms. The testing and maintenance efforts also go down.

A developer’s nightmare is when they are asked to code for multiple platforms. Creating native apps means knowing Swift (for iOS), Kotlin (for android apps), or just Flutter or ReactNative(for both). Anyone would prefer maintaining a single codebase by using a hybrid language. Reusing the same code for different platforms makes a developer’s life easier.

Users who buy phones based on camera quality, phone specs, or just brand value do not care which app wouldn’t work on it. Imagine, if users buy iPhone, they wouldn’t care if the Camscanner app doesn’t work on it. They will find an alternative to it, and it will be a loss for the business that didn’t launch a cross-platform app.

Creating this experience with Flutter is ultra-easy as everything in Flutter is a widget. Widgets allow integrating a button/menu/textbox anything and everything without updating the code multiple times. On the one hand, it has an integrated Material Design widget for Android; on the other, it has Cupertino for the iOS interface. More the widgets, better the user experience. With cross-platform mobile app development, businesses ensure that their customers are content. They receive the same experience regardless of the OS they are on. It is only then when the companies know how to sell well.

Frameworks like Flutter are open-source frameworks that collate various plugins according to the platform’s functionality. These are also referred to as Federated plugins that separate the support of plugins for Android and iOS into different packages for use. Using a cross-platform mobile app development framework like Flutter, you can reuse almost 85%-90% of the code. Especially for B2B verticals, where you can have your own set of requirements, you’d need customization of features. Therefore, it is better to customize the apps using various available plugins.

With Dart, you can inject changes into a running application called the ‘hot reload,’ which makes implementation a quicker job. Such features relieve the developers from the constant ‘changing-the-code,’ and ‘updating its struggle.

Once the time invested shifts from creating the app on various platforms to other businesses’ agendas, you invest it wisely. Tracking customer feedback, data, and collating behavior lets you pivot or change your plan much earlier in your project life cycle.

Imagine hiring developers for developing your business’s mobile app. If it is built using the Flutter framework, you have one small yet efficient team of developers who can code together, test together, and know the in and out of the product rather than decrypting new issues with different languages. Not only this, since by using Dart, the application directly communicates with the platform, this lets the developer create complex applications without worrying about the start-up time or performance. Therefore, the team can focus on features than issues.

When the world is working around knowing their target customers better, omnipresence is undoubtedly a better choice. This includes building applications for both Android and iOS, keeping the user experience and speed on top charts.

The larger question that remains then is: which cross-platform app development framework to use?

For us, the answer will always be Flutter. Awareness about the advantages makes us more tended and confident of our choice.

If you feel cross-platform mobile apps development is the answer to your business growth, then Contact Dark Bears to create one for your business too.