What are the Top Hybrid Mobile App Development Technologies to Consider in 2022? 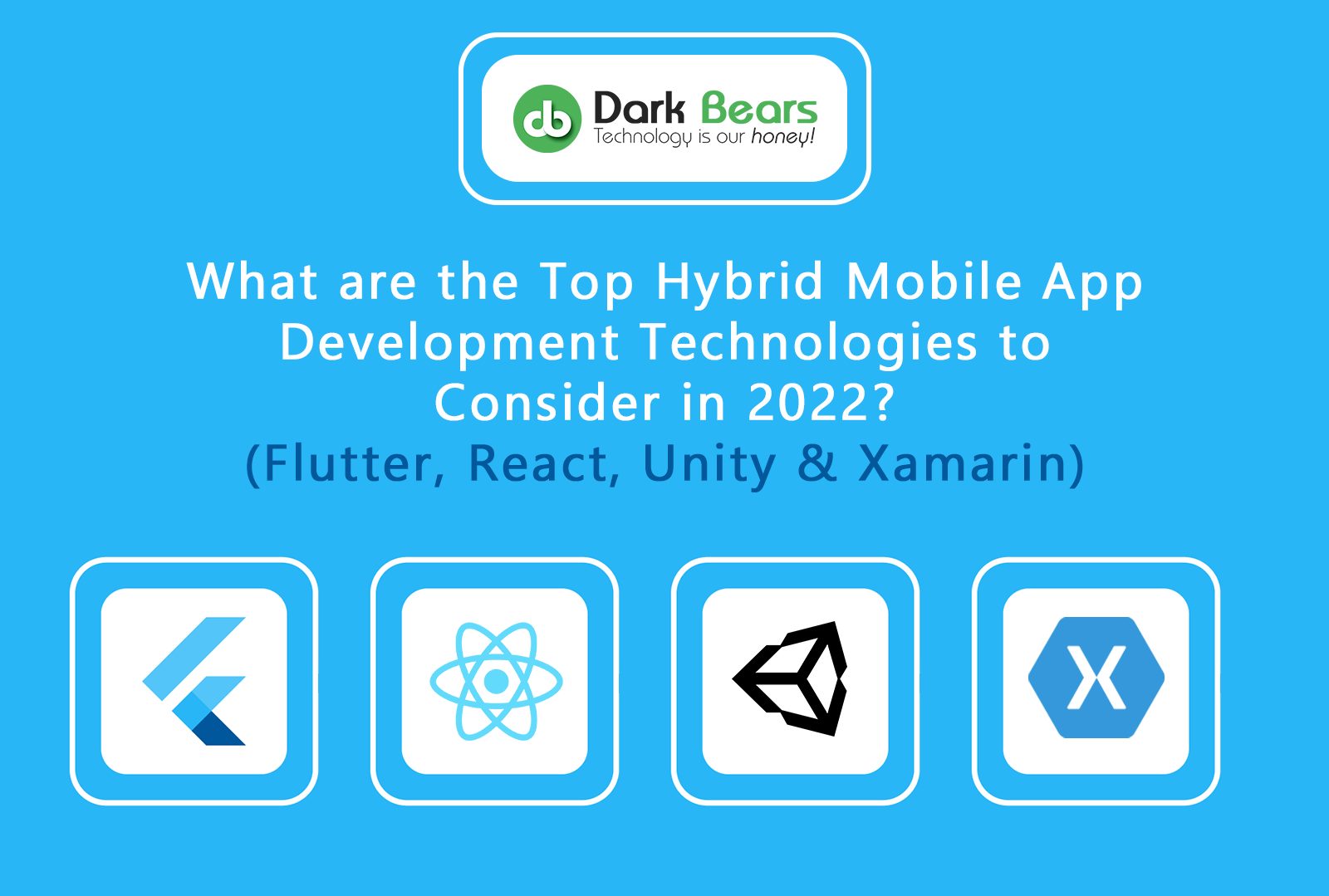 A report by Statista shows innumerable framework options for developers to build a hybrid app. However, Flutter and React Native top the hybrid app development framework list in 2019 and 2020, respectively.

As per the report mentioned above, 42% of the global developers go with React Native as their preferred hybrid app development option in 2019 and 2020, while Flutter seconds the race with a penetration rate of 30% among global developers in 2019. Later on, it touches the threshold of 39% global developers by 2020.

Though we cannot deny that many modern developers are moving towards Unity, Corona, Xamarin, and more, why still do these two frameworks top the list?

This blog post focuses on two major frameworks: flutter and React Native, discusses its advantages, limitations, and applications, talks about how the hybrid development approach benefits in the future, discusses its use cases and chooses the best hybrid framework.

So, before we proceed further and hire a mobile app developer to build a futuristic and cost-effective solution for business, let’s look at a few stats from a market perspective to get a clear view for decision.

Native mobile app development services are designed and coded specifically for a dedicated operating system using a specific programming language. E.g., Kotlin is a native Android and Swift for iOS.

Majority of the time, business and enterprises preferer native development of its robust and reliable development approach. However, the reliability and robustness come at the price of increased app development costs by at least 30%. On the contrary, the code used to build an Android application cannot be reused to build iOS ones.

So, what’s the way out to bring an app solution that targets multiple platforms in a cost-effective approach?

Welcome to the world of hybrid mobile app development. Its unique combination of web and native app development services targets multiple platforms. It uses two app development approaches, popularly known as cross-platform or hybrid development. Though these hybrid apps cannot be compared in terms of speed and performance with native apps, they are built faster and is cost-effective.

Let me put it this way – what’s the cost to build a Native v/s Hybrid app?

Well, native app development can sum up somewhere between $10K – $350K depending upon your app scope, features, and functionality. On the contrary, hybrid app development may range around $5K – $200K.

How does Hybrid Mobile app development create value for the business?

As mentioned above, the cost-effectiveness of hybrid app development is making business inclined towards it. So let’s deep dive and find out how a hybrid app creates value for the business.

1. More users with a single app

A well-built hybrid app will integrate all the features and functionalities you might see in a native Android or iOS app. It gives you the ability to target a larger customer base with the benefit of two operating systems. This is the major competitive edge as the native technology limits you from reaching other platforms.

While native app development seems to be a bit expensive in maintenance, choosing a hybrid solution can make it easy to edit, update and expand software at a lower cost.

For instance: There’s no need to constantly update your hybrid app each time a newer update is released. This “2 in 1” technology saves ample time, resources, and budget with fewer update requirements.

Hybrid apps aren’t confined to Android or iOS app store rules. E.g., With a hybrid solution, you can engage users with push notifications and give companies much-needed control over their applications.

When you switch to a hybrid development approach, you just need to manage a single codebase. This results in a decrease in the number of developers, resources, budget, and timeline. In addition, it means hybrid app solutions can quickly come forward to market and thus save the company’s resources.

Gmail is a popular and robust email service tool that has redefined today’s cross-platform market. Powered by HTML, this hybrid application has a limited range of usability. With the further enhancement in HTML5. Gmail boosted its user experience with more advanced features and functionalities. In addition, the adoption of the mobile version has enhanced its user base with seamless performance.

Twitter – Another social networking site is one of the best hybrid apps. What’s special about this app? It solves all the downsides of the cross-platform app especially related to performance issues. Its fast loading speed and smoother performance have changed the user’s perspective for a hybrid app, of course, positively. As a result, it has boosted demand for business in recent years.

Uber – A taxi booking service with an intuitive user interface that allows users to book a taxi in a hassle-free way. This user-friendly hybrid app comes with the ability to perform faster on multiple devices with numerous dynamic features. It comes with no surprise that Uber has revolutionized the global taxi industry.

How to Select the best Hybrid mobile app development frameworks?

Before we come down to the best hybrid mobile app frameworks- Flutter and React Native, you should be aware of some key considerations to keep in mind while selecting the hybrid app technologies.

Backed by Google, Flutter has gained massive popularity globally to build hybrid apps. However, its fame is not just due to Google’s backing. It has brought many possibilities and allows developers to create highly productive apps using a single codebase. Of course, for Android and iOS.

Compared to Flutter 1.0, Flutter 2.0 is a more versatile framework to build portable, strong, faster, and interactive app for multiple OS, including Android, iOS, Windows, and macOS. Moreover, supporting multiple browsers, Flutter 2.0 can be integrated with the latest applications like smart TV, appliances, cars to make the world more integrated.

Let’s have a look at some Flutter features that made it famous.

Let’s have a look at some Pros and Cons of Flutter.

Top Applications made using Flutter are:

How much does it cost to build a flutter mobile app?

Well, it depends on your multiple aspects, including project scope, requirements, hardware requirements, development team size, features and functionalities, and so on. However, to get an exact idea, you can outsource your project to a leading flutter mobile app development company with in-depth experience building futuristic and integrated Flutter apps.

React Native is capable of rendering impressive mobile apps for Android and iOS. Using React Native, mobile app developers don’t need to code from scratch to build apps. Instead, it makes use of building blocks to build cost-effective mobile apps.

Let’s look at some React Native Features that made it famous.

Let’s have a look at some Pros and Cons of React Native.

How much does it cost to build React Native mobile app?

Well, it depends on your multiple aspects, including project scope, requirements, hardware requirements, development team size, features and functionalities, and so on. However, to get an exact idea, you can outsource your project to a leading React Native mobile app development company with in-depth experience building futuristic and integrated Flutter apps.

So, these are some handpicked best hybrid app frameworks for your app development project. Each of these frameworks has its strength and weakness, so pick the one that suits your business needs.